Two weeks ago I read this scripture.
“Then he said, “I tell you the truth, you will all see heaven open and the angels of God going up and down on the Son of Man, the one who is the stairway between heaven and earth. ””
‭‭John‬ ‭1:51‬ ‭NLT‬‬

I had never noticed this reading before. I remember another story from the Old Testament where Jacob had a dream. 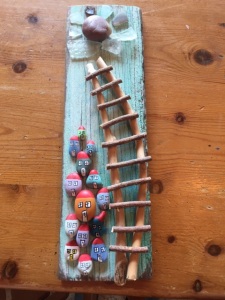 Jacob found a stone to rest his head against and lay down to sleep. As he slept, he dreamed of a stairway that reached from the earth up to heaven. And he saw the angels of God going up and down the stairway. At the top of the stairway stood the Lord, and he said, “I am the Lord, the God of your grandfather Abraham, and the God of your father, Isaac.” But he was also afraid and said, “What an awesome place this is! It is none other than the house of God, the very gateway to heaven!””‭‭Genesis‬ ‭28:11-13, 17‬ ‭NLT‬‬

On holiday in Greece recently I visited a Craft shop. The Artists make their pieces from reclaimed items they find on the beach. I too work with stuff from the shore where I live in Northern Ireland. Small sticks, driftwood, pottery, Seaglass and bits of rope are some of things I find. The man of the shop made ships and boats. On each one was a ladder that went from the deck of the ship up the mast. Ladders also figured on the lady’s work. Here is an image of a ladder reaching up from the earth to the clouds above. It is from a piece of art I bought form a craft shop in Greece.

The theme of the ladder came to me again today. I was reading Merlin Carothers’s book Proson to Praise. In it Merlin recalls a vision he had.

“I saw a bright summer day. Up above was a solid heavy black cloud. A ladder extended from the ground into the dark cloud. At the base of the ladder were lots of people who wanted to get a chance to climb the ladder. They had heard that beyond the cloud was something beautiful. Some people tried to climb. As soon as they got to the dark cloud they came sliding down again. Merlin climbed the ladder. He kept going through the dark cloud even though it was difficult. He came into intense brightness.”

The Lord explained to Merlin that the ladder represents praising God. Some people start out praising God but give up when times get difficult. They lose faith and go sliding back. When one continues to praise God he comes to a place where he can walk on difficulties no matter how dark they seem as long as he keeps his eyes off the problem and looks to the Lord.

I’m encouraged today after reading about Praise. I will believe that God can work all things together for good as we praise him and thank him no matter how difficult the situation gets. He is in control. Keep clinging to the ladder of praise and keep going up. Keep clinging onto Jesus who is the stairway to heaven. He takes us from the earth to heaven, just as Jacob saw in his dream.

5 thoughts on “The Stairway to Heaven.”