God will restore our fortunes. 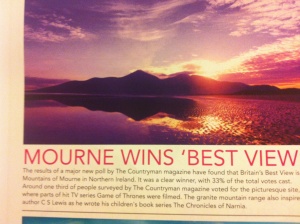 I was born near where the Mountains of Mourne sweep down to the sea in Co Down Northern Ireland.  I took its beauty for granted.  I left home at 18 and studied in Coleraine, eighty miles away.  A new university had opened there and I applied to go there and was successful.  I remained there and raised my family.

I came to visit with my sister for a few days with four of my youngest children.  She lives in Co Down.  We went for a drive to Newcastle.  As I approached the town I was amazed at the beauty of the mountains that stood before me.  I had not appreciated this beauty before.
Are not we all like that.  When we are young we can’t wait to leave home to seek our fortunes somewhere else.

Percy French wrote a song which helped  publisize the Mountains of Mournes in Co Down.

With people here workin‘ by day and by night

They don’t sow potatoes, nor barley, nor wheat
But there’s gangs of them diggin’ for gold in the street
At least when I asked them that’s what I was told
So I just took a hand at this diggin’ for gold
But for all that I found there I might as well be
Where the Mountains of Mourne sweep down to the sea.

The song tells us about a young man who left behind his girlfriend in his hometown near the Mournes, to seek his fortune in London.  He comes to realize the futility of hard labour away from his homeland, his beloved and his beautiful country.

Some years later my family moved from Coleraine back to Co Down.  God brought me back to my father’s land.  Just as he doing for his people Israel.  Over and over God promised his people Israel that he would restore them to the land of their forefathers.

Down the centuries many people have left Ireland.  Many songs and laments about Ireland have been written.  The inspiration comes out of hearts remembering where they came from and longing to return.  They listened to stories their forefathers told them.

Psalm 126 describes the fulfillment of the longing of the Jewish exiles who returned to their homeland from exile.

“When the Lord restored the fortunes of Zion,
we were like those who dreamed.
Our mouths were filled with laughter, our tongues with songs of joy.
Then it was said among the nations, “The Lord has done great things for them.”
The Lord has done great things for us, and we are filled with joy.
Restore our fortunes, Lord, like streams in the Negev.
Those who sow with tears will reap with songs of joy.
Those who go out weeping, carrying seed to sow, will return with songs of joy, carrying sheaves with them.”
‭‭Psalm‬ ‭126:1-6‬ ‭NIV‬‬

God fulfills dreams.  Are you longing to return to your homeland?  Take the leap of faith and return.

God is restoring my fortunes and filling my heart with joy in my homeland.