Yesterday’s suggested Daily Post was titled “In Transit”.
I am inspired by this heading to write, even though it is a day late.
For the last seven years Brendan and I have travelled to Canada in the Fall. I thought this year would be no exception.  I looked forward to our visits when we renewed friendships, ate out at Vancouver Golf Club and took some meetings to pray and encourage others in their faith.
Brendan got in touch with our host about our plans but the time did not suit him.  A Spring visit would suit much better.  Brendan agreed because he had much work that needed his attention here.
I was disappointed and perplexed.  I am alive. I have recovered from Cancer and want to see new things. I had two dreams about being in Canada earlier in July.  I let the idea of going to Canada pass.
I was getting ready for some visitors last week.  I found this pendant as I was cleaning. 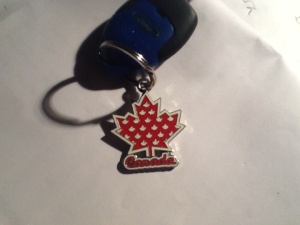 Am I being prompted to think about Canada again?  Proverbs 10 v 24. “The desire of the righteous shall be granted.”   We were planning a round trip taking in Toronto to see my son David, Jacquelyn and attend their baby’s christening.  They invited us to stop with them.  We told him we would not be coming.  He was disappointed.
This morning I went back to bed.  I felt in my spirit a prompting to get up and not get depressed.  I looked at flights to Canada again.  I found a good deal flying with Aer Lingus from Dublin to Toronto.  I could afford it.  Perhaps I could visit my son while Brendan stayed to get work done he was committed to.  I asked Brendan and he agreed for me to go.
I went to book the flight but the internet was down.  I tried to book it over the phone but no one was answering.  I went into town and was about to book the flight when it would not accept my card.  There was money in my account.  What was wrong?
Home again. “Perhaps the address I gave for my bank details were wrong”, my husband suggested.  I called the bank and sure enough my new address was not registered.  I went back into town with renewed hope and went to book again.  Still no success.  I thought to myself, “Let me check if I have money in my account”
There were not enough funds in my account.  Not to be deterred I went to the bank and  transferred money from one account to the other.  Surely I will have success now.   Back to booking the good deal flight.  Too late they were sold out!
I took a deep breath.  I was getting hot under the collar.  I took off my coat and cardigan.  Will I give up.  Maybe I shouldn’t bother.  Doubts filled my mind.  I decided to try again.  I found another airline called Air Transit.  I looked up their prices.  I found flights that suited the times I was planning to travel and my purse.  I went to fill in my Visa card details but I misplaced it.  I’m  glad no one else was with me.  They might say”Stupid woman”.
I searched my coat, bag, books, under and in the car!  Not to be found.  Again I steadied myself.  I was at the last hurdle.  Will I persevere?  I prayed.  Thank you Lord.  I found the card down the side of the seat.  I filled in the details and with the click of a button my flight was confirmed.
What a relief.  What a joy, my hope was not deferred and my desire to go to Canada is being fulfilled.  And I have a happy son and family waiting to see me.  I am going to see my latest grandchild.  I will see my children’s children as Psalm 127 says.
Do you have a desire to do something or go somewhere?  Press in to see it fulfilled.  I had twelve difficulties to overcome. Try and try again.  A desire can be like a flickering flame but God by his Spirit can fan it into flame and bring the desire about.  Alleluia.  God is good.

One thought on “In Transit. My Desire Fulfilled.”