It is a great privilege to see and walk in the places where Jesus walked.  I am so thankful to God to be alive to Praise him for my healing from cancer.
One the first day of our visit to Jerusalem we went to the Mount of Olives.  From there we had a panorama of the ancient walls of Jerusalem in the distance, the Temple Mount, the Kidron Valley, the Garden of Gethseme, and the City of David to the left.  In the distance we could see Bethlehem.
To the left in the distance is Bethlehem.  In middle is the Kidron Valley. A spire in the distance is near Zion gate where Jesus had the last supper.  At the left is the beginning of the Walls of Jerusalem.  The entrance to the Wailing Wall is there, the Dung Gate.  To the left of the Wall is some of the ruins of the City of David.  The Mount of Olives is now the burial place for Jews.  They want to be buried
near where the Messiah will return.

We were standing on the mount where Jesus went to pray, and where he often spent time with his disciples. Here is a quote from the bible,
“As Jesus was sitting on the Mount of Olives opposite the temple, Peter, James, John and Andrew asked him privately about the coming times.”(Mark 13:3 NIV)
The last three days of Jesus life was spent in the area we could see before us.
Jesus entered the City of Jerusalem.  People welcomed him by waving palm branches and cried “Hosanna to the Son Of David.”  He chased the money changers out of the Temple.  The Temple is not there now but we could see the Temple Mount.  The Temple was built on Mount Horeb where Abraham was going to sacrifice his son.
Here you have a clear view of the City Walls and the Temple Mount with the Dome of the Rock.  Gethsemene is below to the right.

The bible tells us
“On the first day of the Festival of Unleavened Bread, the disciples came to Jesus and asked, “Where do you want us to make preparations for you to eat the Passover?” (Matthew 26:17 NIV)
They went to a room near the City of David.  There Jesus told his disciples about his coming death and not to be afraid.”
“When he had finished praying, Jesus left with his disciples and crossed the Kidron Valley.  On the other side there was a garden, and he and his disciples went into it.  Now Judas, who betrayed him, knew the place, because Jesus had often met there with his disciples.” (John 18:1, 2 NIV)
This Olive tree is the oldest in the Garden of Gethsemene.

“They went to a place called Gethsemane, and Jesus said to his disciples, “Sit here while I pray.” He took Peter, James and John along with him, and he began to be deeply distressed and troubled. “My soul is overwhelmed with sorrow to the point of death,” he said to them. “Stay here and keep watch.” (Mark 14:32-34 NIV)
Beyond the city walls to the left it is thought to be Golgotha, where Jesus was crucified outside the city walls.  There Jesus suffered and died for us.  His blood flowed on the ground like the blood that flowed from the bulls sacrificed on the altar in the Temple.  He became the sacrifice to God for our sins and sicknesses.  He destroyed the Power of Satan.  So we do not have to live under his oppression.
In the distance is Golgotha, to the right is Rachel’s Tomb and Bethany, where Jesus friends lived. 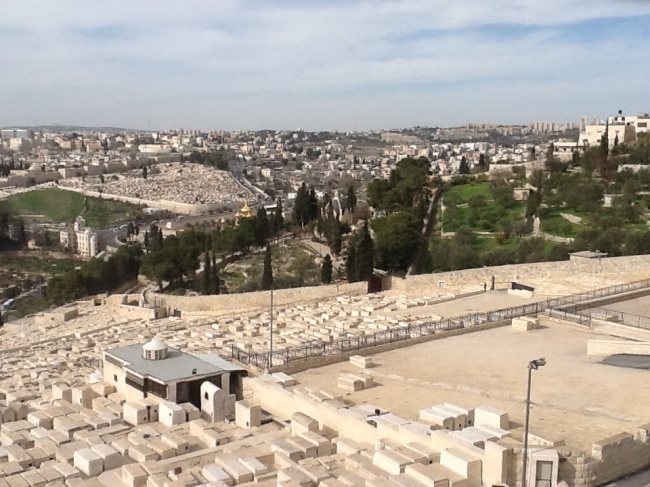 “Carrying the cross by himself, he went to the place called Place of the Skull (in Hebrew, Golgotha ). There they nailed him to the cross.  Two others were crucified with him, one on either side, with Jesus between them.  And Pilate posted a sign on the cross that read, “Jesus of Nazareth, the King of the Jews.”  The place where Jesus was crucified was near the city, and the sign was written in Hebrew, Latin, and Greek, so that many people could read it.” (John 19:17-20 NLT)
Jesus rose from the grave and appeared to His disciples.  He finally rose into heaven from Bethany near the Mount of Olives.  There is no other empty grave in the world.
Love is when someone thinks of the other person before himself.  Jesus loved us and gave his life for us by his death on the Cross.
God loves mankind.

One thought on “Walking in the Places Where Jesus Walked”