Portaferry was a busy port many years ago when fuel and goods were transported by ships.  It has a natural, sheltered harbour and had easy access to England across the Irish Sea. There were not the road networks we enjoy today, when many goods  are transported in lorries.  Many ships would have been docked at the port waiting to unload and then restock with local wheat or potatoes.

But the big ships do not visit any more.  There are some yachts parked in the Marina. The Portaferry Strangford ferry is the biggest vehicle in these parts.

I was pleasantly surprised one evening back in July.  Brendan and I had just returned from visiting our daughter and her husband in Scotland.  I had the pleasure of seeing a luxury liner enter the waters of Strangford Lough and put down anchor in the bay in front of our home.  No it was not the Queen Mary or the Queen Elizabeth.  It was the Hebridean Princess, a small ship but never the less a luxury one.   It caters for fifty people in sheer luxury, according to its website.  Out there on the lough the customers will be settling down to fine dining.  The ship was visiting Irish waters to let their customers see our green land.

It was Gala Week on the lough.  Many yachts with their colourful sails were messing about on the water.  I looked out and saw many yachts with their sails catching the evening wind.  Red, blue, white, small and tall sails.  In the middle of the flotilla the Hebridean Princess appears. 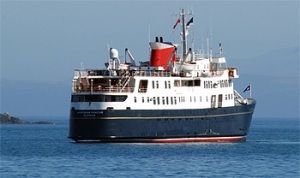 I wanted to find some information about this ship.  Where did it come from? Was it from Scotland, maybe the Hebrides off Scotland. To my delight I discovered the vessel was originally a ferry that traveled between the Scotland mainland and a Scottish Island.  It had been bought in 1989 and was restructured to become a cruise ship.

MV Hebridean Princess is a cruise ship operated by Hebridean Island Cruises. She started life as the MacBrayne car ferry and Royal Mail Ship, initially RMS then MV Columba, based in Oban for the first 25 years of her life, carrying up to 600 passengers, and 50 cars, between the Scottish islands.

My son in law’s father was the manager of the Caledonian Mac Brayne fleet.  He was instrumental in putting into service ferries that would connect the Scottish Islands to the mainland.  He did a great job. I appreciate the service our local ferry provides, connecting Portaferry to Strangford.

The Caledonian MacBrayne fleet is the largest fleet of car and passenger ferries in the United Kingdom. With 30 units in operation, the company provides lifeline services to 22 islands off the west coast of Scotland, as well as operating routes across the River Clyde.

I was touched that I am connected to the history of the cruise ship that came to visit Strangford Lough that day.

2 thoughts on “A Cruise Ship is Anchored Offshore”